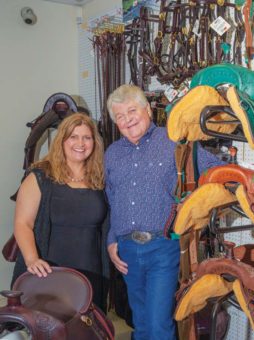 Jeffers offers quality products to customers near and far

When Ruth Jeffers walks across the warehouse floor at Jeffers in Dothan, it’s not a typical stroll for a CEO of a large company with a national footprint.

She greets each employee by name, and they do the same to her. And she doesn’t have a large, secluded office. It is out in the open and right by the door to the building. She keeps this location so she can be sure to speak to as many people as possible during the day.

Jeffers learned many of her management strategies from her father, Dr. Keith Jeffers, who started Jeffers in the basement of his Missouri home in 1975. What was then a small, family business moved to Dothan in 1981, and it is now one of the largest privately-owned catalog and e-commerce health supply retailers in the country.

The company sells pet, equine, and livestock supplies, and many of Jeffers’ 150 employees have worked there for more than 15 years. The Dothan campus features a warehouse, call center, and retail store. Keith Jeffers passed away in 2006, and his wife, Dorothy Jeffers, is now the owner.

“What makes Jeffers special is all of the individual people,” Ruth Jeffers says. “There is no way I can do every job myself. We have so many great people who work here, and they do a great job. We’re all family.”

Dan McGee, a receiving supervisor in the warehouse, has worked at Jeffers for more than 20 years. “I worked with Mr. Jeffers, and now I work with Ruth,” he says. “She worked in packing with me when she would come home from college. To work alongside the owners means a lot, and I find that fascinating because you don’t often see that.”

“They have been in our area for a long time, and they provide a lot of good quality jobs for the residents,” WEC Chief Operating Officer Brad Kimbro says. “We appreciate their investment in our Wiregrass people and their work to improve the quality of life by giving folks an opportunity to work.”

Keith Jeffers began his career as an engineer, and he started raising cattle after retiring in the early ’70s. He quickly became one of the largest cattle dealers in the country. He also sold animal supplies and offered advice to the people who bought cattle from him. Through this endeavor, he saw the need for a more reliable and cost-efficient source for supplies, and he decided to start a catalog. The first catalog was no bigger than a church bulletin, and Dr. Jeffers; his wife, Dorothy; and their two daughters, Ruth and Mary, began handing out the catalogs at state fairs.

“I was 11, and we all handed out catalogs,” Ruth Jeffers says. “I’ve handed out thousands of catalogs. Anybody with a pulse got a catalog.”

The business grew and eventually needed to relocate. After considering places like Chipley, Florida, and Hatties- burg, Mississippi, the Jeffers decided on Dothan. Keith Jeffers noticed that most of the orders arrived from the Southeast, so he figured he could shorten transit time by locating in the region. Most customers could get next-day shipping at no extra charge. Plus, Dothan had Water World, and it was a short drive from Pan- ama City Beach, which his daughters appreciated. “Dothan had a great workforce and seemed like a great place to raise a family,” Ruth Jeffers says.

Today, the business has grown from the church bulletin-sized catalog to three separate, specialized catalogs, which go out four times annually and feature livestock, equine and pet supplies. In 1999, Jeffers ventured into e-commerce by taking online orders. That practice continues today, and the orders come in from all over the country. They take orders from third-party sellers like Amazon, eBay, and Walmart.

The company receives anywhere from 8,000 to 11,000 orders a week. Customers include pet food and pet toys, as well as orders from Calumet Farm, a racehorse training facility in Lexington, Kentucky. Jeffers even offers food for exotic animals like lions, tigers, and bears to zoos, Disney World, and SeaWorld.

It takes a skilled and efficient operation to manage the weekly order volume.

“We have everything set up in stations, and then we have supervisors who monitor those stations and make sure everything runs smoothly,” says Warehouse Manager Phillip Skeen. “You have to work fast, but it’s really a good system.”

A Vision for Greatness

J.R. Miles has worked at Jeffers for almost 30 years. He started as an outside representative, traveling around the Southeast to livestock auctions and consumer trade shows to meet with potential customers and leave them a Jeffers catalog. That was how the company found new customers before the internet. Today he is the livestock product specialist, and he matches customers with the products they need.

Miles said the only change in the business has been the amount of business they do. The philosophy is still the same — to get customers the best product available for an affordable price. That was the vision Keith Jeffers had for the business all along.

Jeffers began this venture as a second career, but it quickly became successful. He also published books on animal health, and employees still remember his lessons, along with funny stories, like when he would bring his pet mountain lion to work on Sundays. “He was the most brilliant man that I have ever known,” Miles says. “His knowledge in the animal health field was beyond my comprehension, and his work ethic was great.”

Livestock was where the business got its start, but the company eventually ventured into equine and pet products. Kimberly Cahill’s focus at Jeffers is equine, which she says is currently the company’s largest market. Jeffers has provided equine products for several well- known TV shows and is a sponsor for the Auburn University women’s equestrian team.

Jeffers also sells products to everyday riders. In 2008, Cahill talked Ruth Jeffers into spicing up the horse blanket offerings. At the time, most horse blankets were solid colors, so Cahill began experimenting with patterns like zebra print and flashy colors. It was a huge success, and they still produce the blankets. “We have a huge amount of pride in our equine products,” Cahill says. “We are one of the oldest equine catalogs in the U.S., and we ship out orders all over the world.”

In addition to the equine products, Jeffers also provides pet products. Jeffers offers a range of quality products for dogs, cats, birds, and more. It’s the most competitive field for the business, but the company sets itself apart by offering quality products and support. Renee Jones is the pet marketing and canine specialist, and she has worked at Jeffers for 18 years. A certified dog trainer, she makes it her personal goal to make sure customers get the best product for their pet. “We are very particular about what we choose for pet products based on our knowledge and experience,” she says. “Our goal is to improve the pet’s and pet owner’s life. We won’t recommend or support a product that we wouldn’t use ourselves.”

Jeffers is not a 24-hour operation, but it is close to it. It’s open seven days a week, with the call center operating from 6 a.m. to 10 p.m. and the retail store open from 7 a.m. to 7 p.m. “My dad’s original philosophy was, ‘We close when McDonald’s is closed, and they are only closed on Christmas day,’” Ruth Jeffers says.

Having uninterrupted electricity is crucial to keeping the operation running smoothly. “We would be out of business in two or three days without reliable electricity,” Jeffers says. “We love Wiregrass Electric, and I don’t say that loosely. They have done whatever they need to do to make sure we always have power. After Hurricane Michael, Walmart was shut down, and we were open for business. We have Wiregrass Electric to thank for that.”

In addition to providing reliable electricity, WEC also makes sure they help Jeffers with affordable electricity. Things like energy audits help ensure the company is using power efficiently. “We went to lights being on timers, and it dropped our light bill by thousands of dollars,” Jeffers says. “We were so grateful to them for that.”

Meeting the needs of Jeffers is a point of pride for WEC. “They basically serve the entire country and the entire world,” Kimbro says. “Reliable electricity is very important to them, so we make sure we provide that. They are a great community partner, so we want to make sure we meet all of their electric needs.”

Many of the employees have worked at Jeffers for years, and most of them have the same reason for being there so long — family. “I feel like everyone I work with is a second family to me, even though it sometimes seems like they are my first family because I see them so much,” says packing supervisor Corelle Griffin.

Anzel Granger has worked at Jeffers for 17 years. He used to deliver coffee to Jeffers, and when he retired he began working there in customer service and returns. “I’m not going anywhere,” he says. “I’m 73 years old. I love what I do, and don’t mind coming to work every morning.”

Teresa King has also been at Jeffers for 17 years. She began as a packer in the warehouse, and she is now a packing supervisor — a crucial job for making sure orders are sent out on time. “I enjoy working around all the people,” King says. “We are like a family. It’s a great company, and I have learned a lot while I have worked here. I was shy at first, but Ruth brought that out of me.”

In the future, the Jeffers team will continue to build on the positive culture they have created. Our goal is to continue to provide good products and great technical advice,” Ruth Jeffers says. “We want to continue doing what got us here and continue to do it right here in the Wiregrass.