After hours of packing up tools and other supplies in the early morning hours, several Wiregrass Electric Cooperative linemen huddled for a final briefing.

With their nerves buzzing about a new and unfamiliar journey, WEC Operations Manager Joey Brown delivered some final reassuring words to the group. As the crew left for a distant disaster zone, Brown’s message about safety and watching out for their fellow man resonated deeply with each lineman.

As the supervisor of WEC’s linemen, Brown leads efforts to ensure every job is performed safely — as exemplified by his briefings before disaster responses near and far. For this constant focus on safety, Brown recently received the prestigious O.G. Anderson Award from the National Utility Training and Safety Education Association.

NUTSEA continuously evaluates safety and training measures to ensure the best practices are taught at utility companies nationwide. Brown is the sixth recipient of the honor and the first from an Alabama cooperative.

“It has been 18 years since we’ve had a significant accident. We have built a strong culture of safety at Wiregrass Electric Cooperative,” says WEC CEO Les Moreland. “Joey Brown has played a critical role in the development of that culture with his attention to detail and consistent, calm presence. The O.G. Anderson Award is a testament to Joey’s commitment to the utility industry.”

Brown is nearing his 34th anniversary with WEC. Prior to taking the operations manager post, he served in a variety of linemen positions with the cooperative. That experience, and Brown’s character, played major roles in him earning the award, says WEC Vice President of Engineering and Operations Jason Thrash. 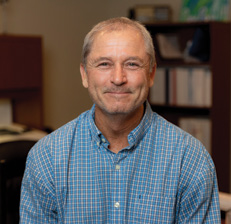 “Joey was deserving of this award because of his outstanding work ethic, his servant heart, and his knowledge of distribution line construction,” he says. “He is a very dedicated employee and loves the cooperative. He is an example for others to follow.”

“He has a get-it-done attitude and always goes above and helping others,” Thrash says.

“We are proud to employ Joey and others who follow his example,” Kimbro says. “He is a true catalyst, inspiring others to remain vigilant on the job always. We commend him for his hard work and excellence and thank NUTSEA for recognizing his efforts.”