On command, a coach pulls a cord, releasing a “bird” into the air at the Fort Rucker Skeet Club. In mere milliseconds, the clay pigeon rises to 18 feet while traveling at a speed of about 45 mph.

“I never dreamed that this soon we would be at this level,” she says. “I never envisioned this after our first tournament in 2018. Now we’ve won a state championship, and we’re representing the state at nationals.”

The team of four — Mack Hollis, Hagen Seymour, Dawson Williams, and Trevor Woodham — attended the nationals, conducted in Grand Island, Nebraska, in late June. Several fundraisers and sponsorships, including one from Wiregrass Electric Cooperative (WEC), helped pay for the trip.

“Wiregrass Electric Cooperative knows how enriching extracurricular activities like sports and music programs can be for today’s youth,” says WEC Chief Operating Officer Brad Kimbro. “They teach responsibility and discipline while providing opportunities to build lifelong friendships. WEC is proud to support efforts and programs that benefit the quality of life in our communities.”

The idea for a skeet team originated with former Houston County 4-H agent Doug Summerford, who asked Woodham to consider taking a shotgun course in order to lead the team. Woodham, a science teacher, pursued the idea with the approval of her principal. 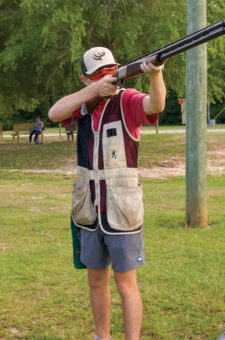 While response to the team’s creation was enthusiastic, team members experienced a steep learning curve regarding the sport’s rules, competition formats, and best practices. Many had little to no experience shooting skeet before.

“The most I had ever done was shoot with handheld throwers in the backyard,” Hollis says.

“I hunted birds a little bit, but most of what I shot was with a rifle,” adds Seymour, noting he first used a pump shotgun — not ideal for shooting 25 consecutive targets — in competition.

Yet, the team persevered, and signs of progress appeared early.

“Our very first competition, we didn’t know what we were doing,” Woodham says, referencing a 2018 event. “At the end of the tournament, the person putting on the tournament called me and said we won.”

Since that point, the team has sharpened its skills thanks to retired Army Col. Ralph Aaron, who is the Fort Rucker Skeet Club president. Aaron is one of 17 certified National Skeet Shooting Association Level 4 instructors in America.

“If it wasn’t for Doug Summerford and Ralph Aaron, we wouldn’t be doing what we’re doing today,” Woodham says.

After strong showings in tournaments in 2019, the Wicksburg team appeared poised to make a run at the 2020 state title. Just before the competition was scheduled to occur, the coronavirus pandemic caused its cancellation.

“I believe we would have won it. Our team was really, really strong,” Woodham says. “When our season got cut short by COVID, we were shooting really, really well.”

That only delayed the aspirations for glory until 2021. While the team had lost one member to graduation, the other members were confident they could shine on the state’s biggest stage.

“We knew we could definitely go out there and do it,” Hollis says. “We all know we’re really great shooters, and we know how to hit every bird out there.”

Seymour hit 49 out of 50 targets and earned second place in the event, and Woodham says her top-four shooters all finished in the top seven en route to victory.

As they prepared for nationals, the competitors believed simple practices could help them perform well on the big stage.

“We’re just making sure we can hit any target we’ve been having problems with,”
Seymour says. “You’ve really got to focus on the mental game and make sure you’re strong. Make sure you don’t get fatigued shooting a lot. Especially in heat, 100 targets straight can be very taxing.” 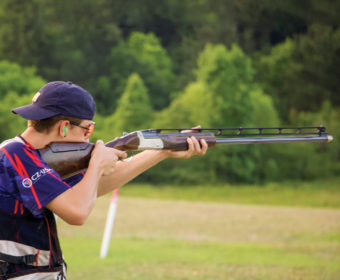 While being surprised by the monumental growth of the program, Woodham says it should not be a shock if Wicksburg claimed the national title this summer.

“Winning nationals is what all of the shooters talk about. We have a really strong chance of actually winning.”

Clubs and organizations interested in obtaining a WEC sponsorship or donation can complete a form on our Sponsorships & Donations page.