WEC recently participated in a forum hosted by Troy University and Yellowhammer News to discuss the legislation and partnerships needed to bring faster and essential internet service to rural Alabama.

The forum, “Connecting Alabama’s rural communities,” was part of Yellowhammer News’ “News Shapers” series designed to localize issues and highlight local leaders in a way that educates the entire state.

WEC’s partnership with Troy Cable and the need for better broadband in rural America was a focus of the session.

“This was such an important event because it is a much-needed discussion,” Kimbro says. “Everyone who participated in this panel is dedicated to bringing a high-speed internet connection to rural Alabama, and this was another important step of that process.” 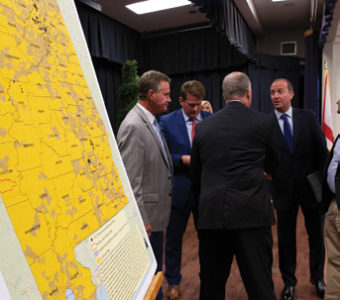 Chesteen has long championed broadband efforts at the local and state level. When he was a state representative, he sponsored the Wireless Infrastructure Renovation for Education Act, which was approved in 2016 by the Alabama House of Representatives. Known as the WIRED Act, the legislation strives to bring broadband internet to all K-12 schools in Alabama and to improve students’ ability to use technology such as laptops and tablets in the classroom.

Once implementation began, Chesteen visited schools to evaluate the progress. He heard the same message repeatedly: Educators loved having the technology in the classroom, but students were hindered by slow internet speeds at home.

“Electric cooperatives want to be part of the solution,” Strickler says.

More progress was made when WEC conducted a speed test that demonstrated Wiregrass residents’ lack of access to fast internet service. More than 3,000 people took the test. The results, validated by Troy University, have been included in presentations to show the need.

In April WEC visited Washington, D.C., along with representatives from AREA and other electric cooperatives from across the nation, in conjunction with the National Rural Electric Cooperative Association’s legislative conference. WEC presented its speed-test data to the state’s federal delegation and stressed the need for changes of the legal language regarding broadband at the state and federal level to ensure rural America is not left behind.

Currently, the Federal Communications Commission defines the minimum broadband as a service providing at least 25 Mbps downloads and 3 Mbps uploads.

The speed test study showed that 71% of respondents did not have those download speeds, and 66% lacked the minimum upload speeds.

“The results were very disturbing,” says Lewis, who helped validate the results. “It confirmed what we already knew, but it was so sad to see that so many people are not getting the internet speeds they need and, frankly, the speeds they deserve. We are living in an age where there should not be a digital divide between the haves and the have nots. It’s critical that we all have access to it.”

Helping with a Solution 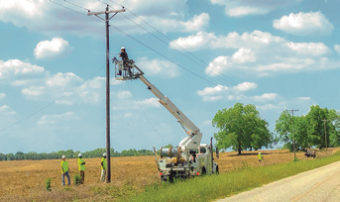 The two companies formed a partnership to connect all of WEC’s offices and substations to a fiber optic backbone capable of fast internet speeds.

“For our electric cooperative to continue providing excellent service, we need to take advantage of today’s technology,” Kimbro says. “It was important for us to have this robust, high-speed broadband connection to continue to serve our members. If that was the only reason, then that would be enough.”

But it was not the only reason to create the partnership. WEC also wanted its members to have access to this life-changing technology. To help with that, members living along the fiber route would also have access to the service.

WEC felt it was necessary to bring broadband to the Wiregrass.

During the forum discussion, members of the panel noted that not all communities have the option of a partnership such as the one between WEC and Troy Cable.

“We are very fortunate to have Troy Cable in our part of the state,” Kimbro says. “If we didn’t have Troy Cable, then we would have to do this ourselves. Some of our sister cooperatives across the state have had to do that, so we are fortunate to be able to leverage both of our organization's strengths. Partnerships are what we seek.”

The results are evident when communities can access fast fiber-optic networks, including improved health care and education. Cowen says he has seen the benefits in Crenshaw and Pike counties, where new industries have located. He feels the same could happen in the Wiregrass, because with high-speed internet small towns have a chance to grow.

“Four different industries come to mind that located in Crenshaw and Pike counties,” Cowen says. “They weren’t even going to consider those locations without access to fiber.”

Where do We Go from Here? 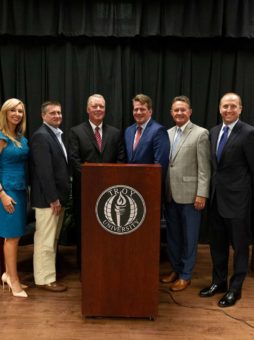 While strides have been made to bring broadband to the Wiregrass region, more work is needed. Only about 25% of WEC members have access to Troy Cable’s fiber. Troy Cable received a $575,000 state grant from ADECA as part of the Broadband for the Wiregrass partnership in July to help expand its network into the Cottonwood area. For many WEC members, however, access to the service could be years away.

“It took us about 50 years to get everyone electricity in Alabama,” says Strickler, and now a similar process is beginning to provide internet service, with the help of legislation and grant funding.

“The grant funding is phenomenal,” he says, but “it’s a very small amount of what we need. It’s going to take time to find a model that works for everyone.”

Kimbro says this is one of WEC’s top goals, and the cooperative won’t stop working until every home in the Wiregrass has access to broadband.