Because many in the Wiregrass lack access to broadband internet services, two organizations — Wiregrass Electric Cooperative (WEC) and Troy Cable — created the Broadband for the Wiregrass partnership to make a difference. A recent $1.38 million state grant, the second such award for the partnership, will help connect more residents to essentials like telemedicine, digital education, and employment resources.

“So much of our life is now tied to internet access, including education, telehealth and medicine, and economic development,” says Alabama Department of Economic and Community Affairs Director Kenneth Boswell, whose department oversees the state’s broadband grant process. “Every day we are discovering new ways that high-speed internet is important to people living in both urban and rural areas.”

Recognizing broadband’s importance years ago, WEC officials envisioned a day when all of their members would have access to the valuable resource. They found a willing partner in Troy Cable, which is using WEC’s rights of way at no cost to complete the expansion projects.

“Wiregrass Electric Cooperative began in 1939 as an effort to bring electricity to rural areas where other power providers would not serve due to cost concerns,” says Les Moreland, Wiregrass Electric CEO. “More than 80 years later, we find ourselves in a similar situation in regard to broadband internet access. We are pleased to assist Troy Cable in the expansion of this valuable utility, which will improve the service options available to many of our members.” 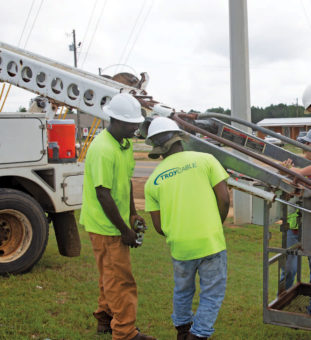 The Broadband for the Wiregrass effort is rooted in WEC’s desire to provide better electrical service to its members. Connecting all of WEC’s 15 substations to broadband services allows for quicker diagnoses — and solutions — of problems along the power grid.

As Troy Cable strings fiber to the substations, it provides many rural residents access to broadband service — defined by the Federal Communications Commission as at least 25 Mbps of download speed and 3 Mbps of upload speed. Troy Cable is utilizing the first grant the partnership earned, a $575,115 largesse awarded in 2019, to connect the final of the WEC substations to high-speed internet by the end of this year.

“We’re so thankful this partnership continues to be fruitful for the Wiregrass,” says Brad Kimbro, WEC chief operating officer. “Expanding broadband allows residents here — many of them our members — to compete educationally and economically while ensuring they have access to quality-of-life boosters like telemedicine and entertainment options.”

Many of the area’s residents and businesses have never had access to true broadband internet services, a deficiency made clear by the coronavirus pandemic, says state Sen. Donnie Chesteen of Geneva, who spearheaded Alabama’s investment into rural broadband access. The pandemic forced many to shift work and education to home, and it caused others to rely on telehealth for medical appointments — all tasks that need strong internet services.

“The coronavirus has highlighted how important this effort is,” Chesteen says. “We have kids trying to do schoolwork who don’t have good connections at home. It makes it much more
important to continue broadband expansion.”

Troy Cable and WEC continue to apply for state grants even though the first expansion project will accomplish the original goal of connecting all of WEC’s substations to high-speed services. The second grant will provide a broadband option to 1,190 homes and 80 businesses in Covington, Geneva, Coffee and Houston counties by June 2022.

Some challenges remain in obtaining the overall goal of broadband for everyone, though, particularly in how the FCC declares an area as served by high-speed internet. Statutes dictate that grant funding must be applied in underserved areas, yet some of the areas considered served do not actually have access to broadband speeds.

To prove that many of the residents living in areas listed as served lack access to high-speed internet, WEC organized an internet speed test for its members in early 2019. In that test, half of the 2,400 members who participated registered download speeds of 6.1 Mbps or slower and median upload speeds of less than 0.8 Mbps — well below the FCC benchmark for broadband speed.

WEC officials joined others from the area to present the results to Alabama’s congressional delegation in hopes of inspiring statute changes that will help partnerships like Broadband for the Wiregrass have more impact.

Chesteen says initiatives like those show WEC’s dedication to serving its members well.

“It is a goal of Wiregrass Electric Cooperative to have every one of its members have the ability to connect to broadband internet speeds. They have said that from the start,” Chesteen says. “The area is fortunate to have an asset like Wiregrass Electric fighting for it.” 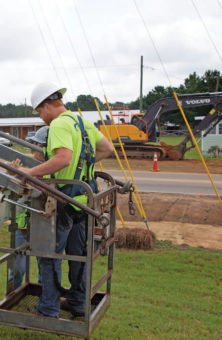 At Wiregrass Electric Cooperative, we’re always looking for ways to better serve you. That’s why in 2018 we launched Broadband for the Wiregrass, a partnership with Troy Cable that is bringing world-class internet to underserved areas of the Wiregrass.

And now we have developed an online tool that shows you the progress we’ve made.

On the front page of our website, wiregrass.coop, you will find a Broadband for the Wiregrass banner. Clicking on the banner will send you to a map that shows where Troy Cable internet service has been established and areas where future fiber expansions will reach.

The green areas reveal where broadband service is currently available. The yellow areas show where our current expansion efforts, funded with help of a 2019 state grant, will reach by around December.

The red areas note our plans for expansion following the approval of a new $1.38 million state grant. That project is in the design phase and should begin in the third quarter of this year.

That project should be completed by June 2022.

Just as we started as a way to bring electrical service to rural areas, we want to bring another critical utility — broadband internet service — to the same areas. That’s part of our commitment to you. That’s the Wiregrass Way.

The state government created the Alabama Broadband Accessibility Fund in 2018 in an effort to help reduce the costs internet service providers encounter when expanding broadband services to rural areas. As of early 2020, the state had set aside $35 million per year in competitive grants to provide reimbursements of up to 35% of an expansion project’s costs.

The Broadband for the Wiregrass partnership between Wiregrass Electric Cooperative and Troy Cable has earned a grant in each year the state has offered them:

“Our cooperative will continue its efforts in seeking out and applying for future state and federal grant opportunities to fund our Broadband for the Wiregrass efforts,” says WEC Chief Operating Officer Brad Kimbro. “This will help us achieve our goal of getting everyone in our Wiregrass community access to a high-speed broadband internet We won’t stop working until we make this happen.”