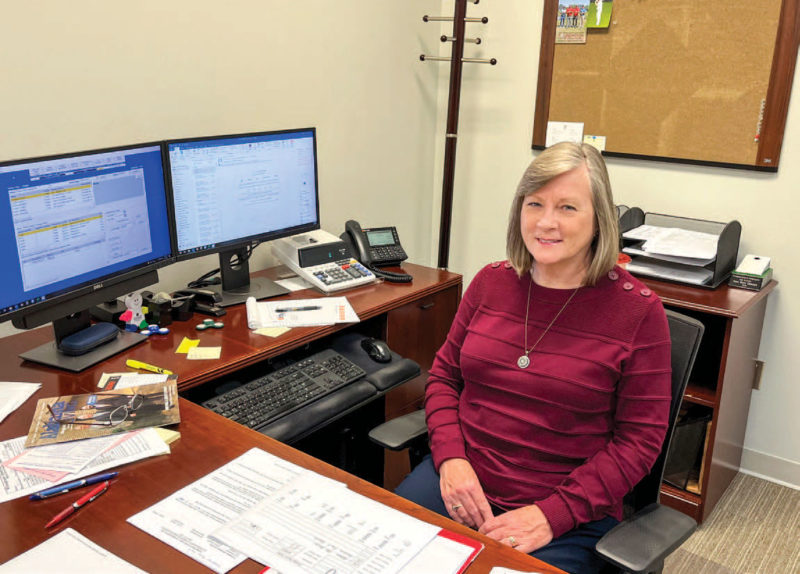 Kay Sullivan can still remember when she walked into the Wiregrass Electric Cooperative office for her first day on the job.

“Things have really changed throughout the years, for the better,” she says.

Sullivan retired as the manager of member accounts on Feb. 28 after 27 years of service at WEC. She is originally from Malvern, but moved to Hartford after she and her husband, Bobby, got married. They celebrate 47 years of marriage this month.

Sullivan was working at a small, family-owned fertilizer company before she got the opportunity to come on board at WEC.

“I was very blessed to be able to get a job here, and it was a good job,” she says. One of the main perks was that she only had about a 3-mile commute to work each day.

When she first began working for WEC in 1994, she was in the Rural Services department, where she sold satellite programming and took applications for electric member services. She eventually moved up to be a cashier, and from there went on to be a dispatcher. From the dispatch center, she transferred to the billing department, where she remained for the rest of her tenure.

“Kay is a great example of what a cooperative employee stands for,” says WEC Chief Executive Officer Les Moreland. “Ever since joining the team she has been committed to serving the members of WEC and going above and beyond to help provide them the best service possible. We are going to miss her, but we are happy for her as she transitions to the next stage of her life.”

Technology is ever-evolving, and Sullivan has seen many changes over the years.

“When I first started, we had to keep paper files. We had a computer system, but we only had one billing cycle and one due date a month, so everything came in at once,” she says.
At that time, members also read their own meters. Over time, the billing cycle changed, and meters were updated to smart meters.

“Just thinking back from when I started and when I left, all the changes were for the better. I’m thankful for the opportunity to work with good people and good co-workers,” she says.

One of her favorite parts of the job was interacting with the customers on a daily basis, back when the billing and member services departments were all in one place. She knew the members by name, and it made her feel good to connect with people to help them with questions about their bill.

“It’s a great community service. I think it’s more of a community instead of just doing business with each other,” she says.

Her day-to-day tasks included verifying bills and checking to make sure all payments received were posted to accounts like they should be. But, when the storms come, it’s all hands on deck for WEC employees to ensure things run as smoothly and efficiently as possible.

Sullivan remembers when Hurricane Michael — a Category 5 storm — hit in October 2018, and around 18,000 WEC members found themselves without power. Hurricane Opal, the 1995 Category 3 hurricane that swept the Gulf, hit just a year after Sullivan began working at WEC.

“The big storms called for long days and nights,” she says. “You come out of your job description and do whatever needs to be done, whether it’s cleaning floors or helping prepare food.”

Sullivan counts her blessings and is thankful for being able to develop such a fruitful career at a wonderful place.

“I have been blessed by my Lord and savior to have been able to work so many years with his guidance and blessing of good health,” she says. “I want to say a special thank you to the senior staff and fellow co-workers for the opportunity to have served with and alongside them during my time at WEC.”

The Sullivans have grandchildren who attend Geneva County High School, and they plan on spending a lot of time at their school activities. After the school year is over, they plan on doing some camping.

“We love to go to Lake Eufaula and fish, but we are considering taking time to branch out and visit some other places,” she says.