In the center of an existing half-mile walking track, the sound of children laughing and playing fills the air thanks to a new splash pad and playground in Cowarts.

Mayor Randy Roland, who has served as mayor there for about 12 years, championed the project. He compiled cost estimates and solicited the support of city council members to approve local funds for the $150,000 project.

“I’ve been working to get the playground for about five years,” he says.

The splash pad consists of a central spraying column of water encircled by smaller water jets, all on a concrete pad where children and the young at heart can run and splash in the spray to cool off. The nearby playground includes slides, swings, and climbing features.

Both projects, which opened in early May, are free for the public to use. 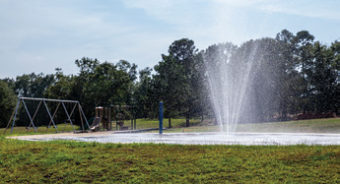 Roland says the typical age range for the playground is roughly 3 to 13, and he’s witnessed all ages enjoying the splash pad. “I’ve seen adults. I’ve seen teenagers. And I’ve seen toddlers,” he says.

New features will eventually be added to both the playground and splash pad, and construction of a pavilion and restroom facilities is underway. Currently, there’s one existing pavilion, and there are temporary restroom facilities near the trail and play areas.

The new facilities are drawing some group events to town, including a recent Southeast Alabama Baptist Association function with about 150 to 200 children and adults, Roland says. He believes tax revenues are on the rise thanks to people gassing up and buying food and drinks while visiting the play areas.

“Cowarts is a great example of one of the many small towns WEC serves,” Kimbro says. “We are happy to see that, thanks to Mayor Randy Roland and the city council working together, children and their families, both in Cowarts and those visiting from other areas of the Wiregrass, have a great way to exercise and enjoy the outdoors with the addition of the new playground and splash pad.”

“The parking lot would be full off and on all day,” she says. “I think it was very successful, and it brought a lot of people who really enjoyed it.”

The play area is open from 9 a.m. to 8 p.m. daily. The splash pad closes for the season on Oct. 1, but the playground will remain open all year.