When Brandee and Adam Lukas became foster parents years ago, it began a journey that transformed their lives — and the lives of many others — in unexpected ways.

“Through having our first foster child in the home years back, we saw areas in the foster care system that could have used some extra help,” Brandee Lukas says. “God was showing us areas where he wanted to be present.”

The couple formed Lifted Higher Ministries, which in two years has assisted about 300 people in various ways. Those efforts are why Wiregrass Electric Cooperative’s Operation Round Up Charitable Foundation and WTVY News 4 in Dothan selected them as the December Silent Heroes of the Wiregrass winner. Operation Round Up also presented the organization with $1,000 as part of the program. 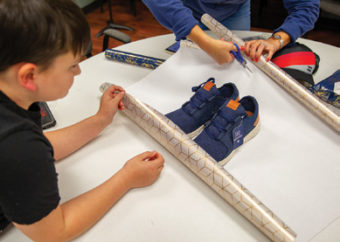 That donation was put to great use as Lukas and Evergreen Presbyterian Church in Dothan purchased Christmas presents for the elderly in the Wiregrass.

“Brandee and her husband, you see their hearts are in the right place,” says Brad Kimbro, Wiregrass Electric’s chief operating officer. “They want to make a positive difference in our community. That is what the Operation Round Up Foundation is all about.”

“This cause is very near and dear to me because I truly believe everything in our society starts with families. If we can fix that, then everything is good,” says Spencer Bienvenu, WTVY News 4 vice president and general manager. “They are exactly what we’re looking for in this program.”

After becoming foster parents themselves a few years ago, the Lukases noticed some gaps in services that governmental organizations could not address.

“The system would offer parenting classes, and these parents would attend three or four of those classes,” Brandee Lukas says. “Without their kids in their custody, though, they didn’t really get to apply those lessons.”

The Lukases began to provide transportation to and from supervised visits for biological parents whose children were in the foster care system. They also organized some of the supervised visits, which the Lukases conducted at area churches so parents and children could interact more comfortably.

The time spent on those visits and trips — some of which could take a couple of hours — allowed the Lukases to forge deep relationships with biological parents. They aimed to teach parents “how to create good patterns” in their lives, Lukas says. In turn, those patterns would allow birth parents to provide more stable environments for their children in the future.

“We come alongside to do life with them, to love on them, and to be there with them to get them reunified with their children,” Lukas says.

Eventually, the Lukases decided to handle those tasks through a nonprofit organization, and Brandee Lukas is the director. In January 2018, they began the process of creating Lifted Higher Ministries, and local Department of Human Resources offices and other organizations reached out for their services once it was established the following month.

As of mid-September, Lifted Higher had helped 252 people in Houston County, 26 in Henry County, and three in Dale County — although that number increased greatly after Lifted Higher provided Christmas gifts to more than 40 seniors in December.

That recent project reflects how much Lifted Higher has grown in just two years. Expanding beyond reconnecting families, Lifted Higher now aids the elderly in several ways, including home improvement projects if needed.

“We had one elderly client who was going to be evicted from her home,” Lukas says. “She had lived there for 20 years, but she had severe arthritis. She couldn’t take care of the home. She wasn’t passing the government housing inspections, so we came in with a team. We organized, cleaned, and went to town on her place. The inspection was the next day, and she passed.”

All of the services Lifted Higher provides come at a cost, which is why Lukas cherished the Silent Heroes gift.

“This is amazing. I am just so humbled that Wiregrass Electric thought of us, and it’s such a blessing for us,” she says. “We do Christmas presents for the elderly for Dale County and Houston County through DHR. It couldn’t come at a better time. Words can’t explain how thankful we are.”

The foundation then provides scholarships and grants in an effort to improve the Wiregrass community. The program generates about $120,000 annually, Kimbro notes.

To support Lifted Higher Ministries, visit the Lifted Higher Ministries website or mail a check to P.O. Box 492, Headland, AL 36345. The organization also accepts donations of car seats, toys, diapers, furniture, mattresses, and other similar items since it provides those to biological parents who need them to establish a proper residence before reunifying with their children.