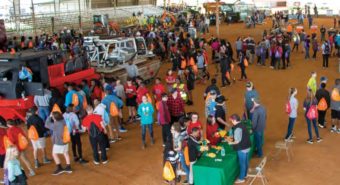 Carefully the Geneva Middle School eighth-grader sank her arms into the Wiregrass Electric Cooperative (WEC) safety gloves and reached to the table below, retrieving materials that WEC linemen use everyday. She then attempted to perform a simple task, a task made much more difficult by the heavy gloves.

Behind the table, the students’ classmates hooked a pole to a switch several feet above their heads. They pushed and pulled on the switch, which intermittently lit a small lamp above the switch.

These activities helped several Wiregrass Electric Cooperative employees provide hands-on examples of some of their daily job duties — and to present information about the great careers the cooperative offers — to more than 5,000 eighth-graders during the Southeast Worlds of Work Career Experience in Dothan in February.

The event exposes students to a variety of careers at an early age, which could shape their educational and occupational decisions as they enter high school, says David Norwood, who chairs the Southeast AlabamaWorks! Regional Council.

“We felt like the eighth grade was a good place to start. Our goal and our mission is to plant the seed — to give them just a snapshot of what industries would look like,” he says. “As students move into high school, they can take advantage of career coaches and dual enrollment programs and really start to focus. Now you’ve changed their whole trajectory by not waiting until the 12th grade or 11th grade for a career fair.”

Wiregrass Electric Cooperative has been a proud supporter of the Southeast Worlds of Work career fair since its inception, providing the event its first monetary donation, says Brad Kimbro, chief operating officer.

“Through their dedication to students and business, Worlds of Work leaders have exponentially grown the event, and it has been a key cog to our area’s workforce development initiatives,” he says. “Those efforts holistically benefit our members, as do our employees’ efforts to attract quality future employees to a growing and important industry.”

Southeast Worlds of Work project coordinator Melanie Hill says the event, now in its fifth year, has already shaped the lives of students and their families.

As one example, Hill describes a mock interview she conducted with a Houston County student earlier this year, during which the student told Hill that she and her mother enjoy photography. The student went on to say that during the first Worlds of Work event, she noticed that Wallace Community College’s radiologic technology program incorporates some of the same passions as photography — so she decided to follow that occupation.

“Her mom happened to be a chaperone to the event that day,” Hill says. “The student said, ‘And my mom decided that day, too. She’s now in the radiology program at Wallace.’”

While health sciences represent the largest of the “worlds” highlighted during the two-day event, it is far from alone. Ten other worlds — utilities, agriculture, construction, manufacturing, automotive technology, public service/military, aviation/ aerospace, transportation/logistics, media/technology and hospitality — accompany it to pique the interest of every student attending.

“Some of those students may not be interested in utilities, but they may be interested in the medical field or construction,” Norwood says. “We planted the seed. Now the career coaches can water it through the high school years.”

For some students, college may not be affordable or interest them at all. As opportunities for technical career courses increase in the area, though, some Wiregrass-area students are receiving industry-level certifications even before they graduate high school, Norwood says.

“A young female student graduated from a welding program before she ever graduated as a high school senior,” he says. “She can now go get a job if she couldn’t afford to go to college. That company may send her to school. We’re starting to see measurable success by noting which students have begun to connect the dots to a specific industry.”

Attendees of the 2020 event were introduced to plenty of these jobs. At WEC’s booth, the students were able to learn about becoming a lineworker.

“A college degree can be a great achievement, but not everyone wants to continue on to college after high school,” says Joey Brown, WEC operations manager. “We want to let these students know about a career in the electric utility industry and that WEC is here for potential employment. If they become an employee at WEC, we will continue their education and cover the expenses needed for their training to become a lineman and to make sure they are knowledgeable and safe in their job.”

WEC’s booth included a model of utility poles, which employees used to teach students skills like disconnecting and reconnecting power, opening and closing new breakers, and working with thick rubber gloves, a standard in personal protective equipment, Hudson says. Additionally, the linemen educated the eighth graders on other types of safety equipment required for the jobs.

While many lineworkers say their career attracts students who love the outdoors, it can also appeal to those who possess technological skills, Brown says.

“We’ve come a long way,” the 32-year utility veteran said. “In the past when looking for a job, we had paper maps that were in the truck. We had to guess where to go. Now we have iPads, and every pole we’ve got has GPS. We put in the number, and it’s just like going on vacation when you put in an address. We can put in a pole number, and it’ll take us right there. We can control switches from the office. We can turn a meter on or off from the office. I can do it from home on my iPad.”

Those tasks may be second nature for today’s students, given their familiarity with the latest devices.

“For somebody like me, there was kind of a learning curve,” Brown says. “They’re used to it. With a little bit of training, they’ll know what to do.”

In just a few years, students like the Geneva eighth graders may decide a career as a lineworker fits like a glove and put that technical knowledge to use.