Broadband for the Wiregrass continues to pay dividends

When Wiregrass Electric Cooperative (WEC) announced a partnership with Troy Cable to expand broadband internet access locally in 2018, state and federal investment in the project was moderate.

Much has changed in the three years since the Broadband for the Wiregrass program began. The federal government has committed $85 billion to broadband expansion through the Rural Digital Opportunity Fund and the recent Infrastructure Investment and Jobs Act. Similarly, the Alabama state government began awarding grants for rural broadband expansion in 2019, and it has steadily increased the amount of money available for those projects.

Some of the legislation has also changed how grants can be used or implemented, effectively opening up more areas where projects can be launched. One other significant change is C Spire’s acquisition of Troy Cable in October.

All of these developments may cause WEC members to have questions about the Broadband for the Wiregrass program’s progress and future. This guide should help answer them.

What Was the Original Intent of Broadband for the Wiregrass?

The Broadband for the Wiregrass partnership originated from WEC’s desire to provide members with better electrical service. WEC arranged with Troy Cable to connect all 15 of WEC’s electrical substations to broadband internet, improving outage identification and response.

As Troy Cable employees installed the broadband system on WEC’s utility poles, they passed many homes and businesses in WEC territory. This created the opportunity to extend internet services to those structures. The Broadband for the Wiregrass partnership built upon this established network, and leaders sought state and federal grants to expand broadband wherever possible in WEC’s service area.

Has it Been Successful? 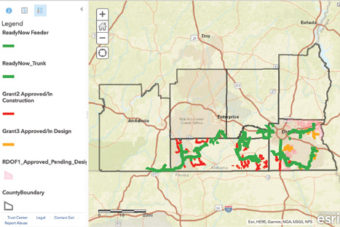 Yes. The Alabama state government has awarded rural broadband expansion grants for three years, and the Broadband for the Wiregrass partnership earned one each year. Additionally, Troy Cable received a $3.6 million grant through RDOF in 2021. Between these grants and the original project to connect substations to high-speed internet, about 8,000 homes and businesses in WEC’s territory will have broadband access by 2024.

Areas already benefiting from the partnership include Webb, Cowarts, Columbia, Cottonwood, and Wicksburg in Houston County. The efforts extend to Slocomb, Hartford, Coffee Springs, and Samson in Geneva County as well as Florala in Covington County. Small sections of Dale and Coffee counties have also benefited.

Did the Partnership Aim to Provide Every WEC Member a New Option for Internet Service?

Not exactly. When the partnership began, about 30% of the roughly 25,000 meters WEC served had true, established broadband internet access. Officials focused primarily on the areas they believed were completely void of a broadband internet option.

People Who Live Near Me Have Received Broadband Internet Access Through this Partnership, But I Didn’t. Why?

There are a variety of factors. One is that you might live in an area “served” with broadband, while those near you do not.

An area is designated as served if at least one provider operates in the census block. Even if the vast majority of people in the block do not have broadband access, it still counts as served. Many of the earliest grants prevented Troy Cable from entering census blocks already considered served.

It is possible that people near you live in a different, unserved census block while you live in a served block. We have worked to loosen these regulations, and progress has been made. The RDOF program is an example since its regulations allowed Troy Cable to apply for grants for wider swaths of area.

One more factor is timing. Several C Spire/Troy Cable projects are currently in the works. As governments set aside more money for rural broadband projects, more grants will be available. Your home or business could be addressed with the next award.

Yes. C Spire has committed to honoring all current agreements and grants. Officials have also expressed interest in continuing to grow the partnership.

How Do I Track Broadband for the Wiregrass’ Progress?

WEC has created an interactive map on its website that shows areas served through the partnership and areas that will be addressed through grants already awarded. The map is updated frequently and can be viewed on our Project Information page.